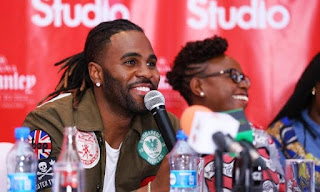 A statement said Jason Derulo would create the official anthem but that African musicians would get a chance to make local versions of the song that celebrate their people’s passion for football through music.
It is now known that the name of the official anthem is ‘Colours’ and that it will be featured on Derulo’s forthcoming album. The upbeat anthem, which features South African rapper Cassper Nyovest, celebrates the vibrancy and excitement that is associated with the world’s biggest sporting event.

“We know that the FIFA World Cup is a global cultural and social phenomenon,” Coca-Cola vice-president of global assets and partnerships Ricardo Fort said. “Every four years, people are drawn to this event from all over the world due to the excitement and platform it provides.
“We believe that music and football are intrinsically linked by the passions they evoke so we are excited to welcome Jason to the team and can’t wait to bring this upbeat anthem to the world ahead of the 2018 FIFA World Cup”
The single is expected to follow in the footsteps of Shakira’s 2010 popular World Cup anthem ‘Waka Waka’, which featured well-known South African band Freshlyground .
“I was honoured to work with Coca-Cola to create an anthem celebrating every team and their fans,” Derulo said. “The song ‘Colours’ represents the different flags and cultures from around the world, and will get everyone moving to a unifying beat. I’m excited to finally tell the world about this partnership as the excitement builds for the FIFA World Cup.”
The localised versions of ‘Colours’ will be performed at the FIFA World Cup trophy tour, which is scheduled to take the 18-karat gold trophy to various places across the continent, starting in Ethiopia (24-25 February), then Kenya (26-27 February), Mozambique (28th February), South Africa (1-3 March) and Uganda (5-6 March).
The ‘Colours’ World Cup anthem is slated for an official release on 16 March.