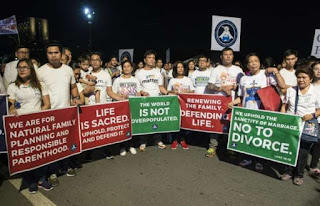 Around 2,000 Roman Catholic Filipinos protested in Manila on Saturday against a push to legalise divorce, with church groups also using the “Walk for Life” march to slam President Rodrigo Duterte’s deadly drugs war.

Around 2,000 Roman Catholic Filipinos protested in Manila on Saturday against a push to legalise divorce, with church groups also using the “Walk for Life” march to slam President Rodrigo Duterte’s deadly drugs war.

The pre-dawn protest was organised by church groups worried about the possible passage of a divorce bill, which is being championed by Duterte’s allies in Congress.
The Catholic Church counts about 80 percent of Filipinos as followers, and its lobbying has helped to make the Philippines the only state in the world aside from the Vatican where divorce is illegal. Abortion and same sex marriage are also outlawed.
“Christ the Lord raised marriage to the dignity of a sacrament. Let not Congress lay waste these victories with a divorce bill,” a commission of the country’s Catholic bishops said in a pastoral letter read at the march.
“What God has joined together, no man, no human being must separate. No to divorce.”
Duterte has not personally taken a stance on the bill. But he has actively attacked the church since taking office in mid-2016, accusing the clergy of sexual abuses and hypocrisy.
The church in turn has been one of the most outspoken critics of Duterte, particularly his human rights record, with the government admitting to the killings of some 4,000 suspects in its drugs war. Activists say the real toll is three times that number.
Bishop Broderick Pabillo, one of the leaders of Saturday’s rally, said the church’s opposition to divorce and its criticism of extra-judicial killings under Duterte emerged from a shared “pro-life” stance on both issues.
“All of that involves life: the taking of life, even divorce…. That deals with the family that is the centre of life,” he said.