Here are 7 things Tinubu said about Obasanjo and IBB after he met Buhari.

Here are 7 things Tinubu said about Obasanjo and IBB after he met Buhari.

APC leader Asiwaju Bola Ahmed Tinubu was at the presidential villa on Tuesday, February 13, 2018, for a meeting with President Muhammadu Buhari.

Of course, Chief Olusegun Obasanjo and IBB’s recent letters to the president became part of the conversation as Tinubu emerged from the meeting to confront a horde of journalists at the lounge.
Chief Bisi Akande was also a part of this meeting.
Here are 7 notable things Tinubu said about the APC, Buhari and Obasanjo afterward.

Tinubu says both former leaders are nothing but pensioners at this point.
“We should let our former presidents join retirees’ club and take pensions but they can participate in our politics if they are interested”. 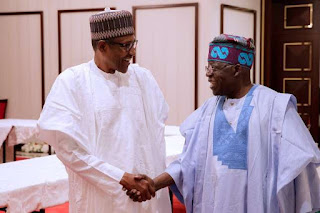 “I don’t address those shadows”, Tinubu said when State House correspondents pointedly asked him about the letters from the past presidents.

“It is a free world but this freedom is not served a la carte but they should allow us to move our country forward. It is a challenge to every Nigerian,” Asiwaju said.

4. If you ever heard rumours about Tinubu leaving the APC, he says you shouldn’t believe those

“I belong to this party (APC). My commitment is to this party. We have a better chance and we are strongly determined to prosecute  the election in a most transparent and democratic manner and we will win”, Tinubu said with doses of confidence

5. Tinubu says he’s honoured that Buhari has tasked him with uniting the APC ahead of another election battle

“Well, l feel greatly honoured with the mutual confidence that the president has reposed in me which is a very strong political challenge.
“We have started in earnest. He has given me free hand to put cohesion, confidence and trust in the party”, he said.

6. Tinubu says Buhari and APC want to leave a legacy for Nigeria

“But we want to leave the country with a legacy. It’s not about Mr. President. That is what he’s telling the country,’’ he said.

7. Conflicts are a part of virile democracies

There have been reports of in-fighting and acrimony within the APC, but Tinubu says that’s only normal in a democracy.
In his words: “Democracy is about conflict resolution process. You can’t do it without resolving conflicts. We can’t build it without understanding the conflicts and sources where we are coming from”.