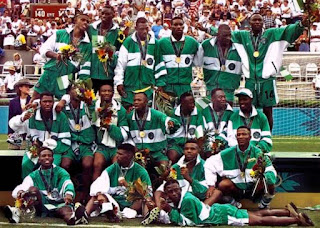 Oruma had a 17-year career playing for the likes of Lens, Samsunspor, Sochaux and was also a regular for the Super Eagles.

These are however trying times for the former midfielder who has reportedly suffered a mental breakdown after losing millions to a clergyman and some fake businessmen.
According to Complete Sports, the former Golden Eaglets star was lured into a fake oil business venture in 2012 where he invested N1.2b.He did that without proper consultation which has now led to the loss of his life savings.
The former midfielder is said to have been scarred by this experience and has almost lost his mind.
“Wilson (Oruma) hasn’t really recovered from the emotional disorder which he suffered after he was duped,” a friend of his Emakpor Dibofun is quoted to say by Complete Sports.
The report has several photos of the 1996 Olympic Games gold winner looking very unkempt.
According to the report, some of Oruma’s ex-teammates have been making efforts to help the former footballer.

Oruma kicked off his career in Bendel Insurance of Benin before moving to France to play for Lens.
It was with Lens that he won the 1998 Ligue 1 title before he went on to play for the likes of Nimes, Servette, Sochaux, Marseille and Guingamp.
He won French domestic cup titles with Sochaux in 2004 and Guingamp in 2009.He was one of the breakout stars of the Golden Eaglets– alongside Kanu Nwankwo-that won the 1993 U-17 FIFA World Cup.
Three years later, he was part of the U-23 team that made history by winning the gold medal at the football event of Atlanta 96 Summer Olympic Games.
He also represented the Super Eagles and won two Africa Cup of Nations (AFCON) bronze medals (2002 and 2006).