How sure should you be before proposing in public?

Before bending that knee in public, this is how much confidence you need.

On January 15, 2018 a clip surfaced on social media, which shows a boyfriend walking away after his girlfriend proposed to him. 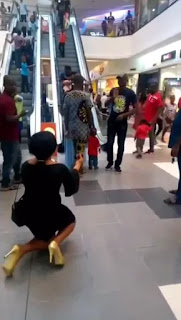 The woman had shunned society’s rules  when she went down on a knee, proposing to her boyfriend on the ground floor of Ikeja city mall but the guy turned down the proposal.
He did this in the presence of all the passersby you’d expect to find milling around on a Sunday afternoon at one of the most bustling hubs of enjoyment on Lagos mainland. dance you need.
What resulted from this rejection was an embarrassment of epic proportions, no doubt; and it served to show again, the precarious ledge on which people place themselves whenever they decide to shoot for the grandeur of a public proposal as opposed to doing so at an intimate scene – like Prince Harry who proposed to Meghan Market  in the privacy of his home.
Only a month ago, a similar occurrence happened when a guy’s public proposal was turned down by his girlfriend at the mall, with her friends watching on her.In response to that lady’s brave rejection, Pulse wrote an article about it;
“When [anyone] chooses to propose when you are unready for that level of commitment or you’re not comfortable enough to take that leap with [them], you need to learn to say an emphatic no!
“It does not matter where [they] did it – in church, at your family get-together, in class, at the airport, anywhere – you need to walk away.
“…The fear of embarrassing him in the presence of people should not deter you from saying no. Those flashing cameras should not force you to say yes.
“…[Anyone] who feels comfortable enough to propose to you in public should be presumed ready and comfortable with the worst happening in public.”

Women can get curved too

Women need to realize that men have preferences and wishes and fears and reservations, too.
So getting rejected when they shoot their shot or go the extra mile to propose cannot be ruled out of this equation of emotions.
Reaction to the embarrassed ICM girlfriend saga shows that many women are yet to get this memo. Apparently there are women who think the guy should have said yes to save her the embarrassment, even if temporarily.
He could have accepted in public and later cancel in private, they say.As earlier stated above, anyone who feels confident enough to shoot their shot or propose should be aware that they do so at the risk of being rejected, no matter how minute.
Rejection is not gender-limited. Anyone can get it.

So how sure should you be before proposing in public?

Understandably, the fear of rejection remains pretty high for more women than men.
Regardless, having a marriage proposal rejected in public remains on some insane, uncharted level of embarrassment; whether you are a man, woman or some undecided cross dresser.
No one should have to bear that humiliation if it can be avoided.So before bending that knee in public, it is advisable to consider all the pros and cons, how far the relationship has gone and the type of impact a failed proposal will have on it.
It makes sense to slyly seek answers ahead from your partner by asking questions that will help you gauge their readiness for marriage and their openness to being put on the spot with a grand public proposal.
Another thing that’ll help will be to read this detailed, helpful article here.
You can’t put a number or percentage on how certain anyone should be before proposing. That’s a conviction everyone would need to attain by themselves.
It is the accuracy of one’s sixth sense that will decide whether their engagement will be reported as a glowing romantic story or an epic fail like that of the rejected and embarrassed girlfriend who left Ikeja City Mall in tears of grief.