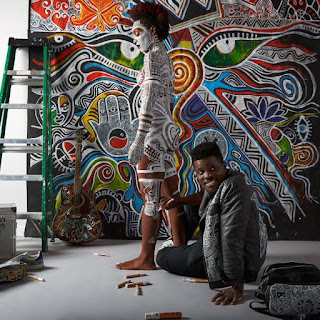 In an exclusive interview with Pulse, Laolu Senbanjo speaks on the success of his sojourn to America and why Nigerians should be more invested in their history.

In just five short years, Laolu Senbanjo has created an artistic legacy that many spend decades trying to build. 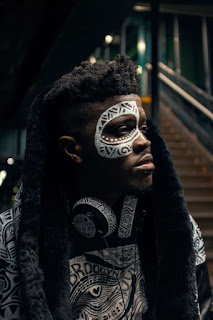 Having arrived in New York with nothing but a dream, he has scaled the dizzying heights of success having worked with brands like Nike, Bvlgari and being summoned to work on Beyonce‘s ‘Lemonade‘ project.
You would be forgiven for thinking that Laolu may have let the success get to his head, after all, who could remain humble with the achievements he has racked up but as he pops out of his hotel lift, dressed in all black with his signature white face paintings and envelops me in a warm bear hug. Laolu feels like reuniting with an old friend.As we begin the interview, the artist is chatty, unguarded and earnest. He talks as if he himself can’t quite believe how far he has come. There’s a childlike disbelief as he talks about working with Beyonce and strolling through New Orleans chatting with the CEO of Parkwood Entertainment, Steve Pamon with the familiarity of an old college buddy. 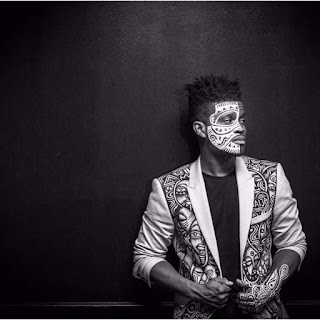 Laolu mentions with a small smile that if he had known who Steve was at the time, he may not have shared some of what he did but that’s part of his appeal, he is so refreshingly candid, so unspoilt by the world in which he has found himself and so willing to share his story which will undoubtedly serve as an inspiration to many artists looking to make that leap.

Despite being embraced by New York, even imbibing the city into his art name, Laolu NYC, he is still very much rooted in his heritage, it’s in his art, it flows through his veins. Wherever he goes he is the personification of ‘omo naija’.
He states, ”When you are Nigerian, you really are an ambassador for the country without even realising it. My art has allowed me not only to express myself but also educate people and I never thought that I would be in that kind of space to do that. Art has been that tool that has brought me in front of a lot of people and allowed me to explain what it means to be Nigerian. I explain to them what the imagery I use signifies and I take them to Nigeria without them having to move an inch which is a unique thing.’‘

Laolu began his journey, not with a canvas, but with a law book as he majored as a human rights lawyer in Nigeria’s capital. He states,”I went to law school in Bwari in Abuja and then I started working as a lawyer. First, I worked at Diamond Bank in customer service but I couldn’t do it. The hours were so long and exhausting and everybody was so happy I was working in a bank except me. When I quit my job working at the human rights commissions, it was borne out of the fact that I couldn’t combine being an artist and doing a 9-5, it was very challenging. I decided that the kind of art I wanted to do needed more of my time, more practice and more focus.”