Jane Mena, narrated how her friend lost her pregnancy following an assault by FSARS. 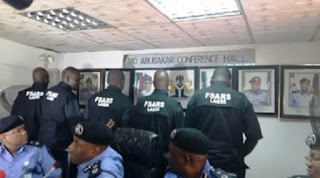 An Instagram user, Jane Mena, narrated how her friend lost her pregnancy following an assault by FSARS.

In Asaba, Delta State, an assault by operatives of the Federal Special Anti-Robbery Squad (FSARS), on a woman expecting quadruplet has reportedly caused the latter to lose her pregnancy.

An Instagram user, Jane Mena, who is a friend of the victim revealed how the incident occurred in a long post. She explained that the expectant mother went into a coma following a violent treatment in the hands of the police. 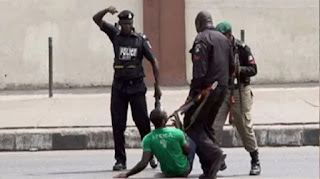 A confrontation with a male driver proved to be the catalyst of what became a chain of unfortunate event, adding weight to the call to have the Special Anti-Robbery Squad (SARS) scrapped.
“This whole issue started from a guy who refused to reverse back a little for my friend to drive by as she couldn’t go back herself Cos of the way my street was filled with stones and her car was really low.
“She then left her car on the same road the guy blocked and walked down to my house, 3mins later, we saw police men from ZONE 5 around the car, they were actually patrolling and stopped, I hurriedly told my friend to go check it out thinking we could resolve the situation amicably, on getting there, they were about to loosen her plate number leaving the other guys car that actually blocked the road and that’s when I intervened on her behalf, the minute I said “oga abeg leave the plate number” that’s how these guys shouted at me, WILL YOU GET OF HERE YOU BASTARD, YOU ARE BECOMING AN UNBECOMING,” Mena began in her Instagram post.
This proved to be the genesis of the familiar feeling of molestation that accompanies an encounter with Nigerian police officers who are considered brutes and also individuals who haven’t shown a proper understanding concerning what their jobs entails.
They are regarded as the sort that have embraced the attitude of intimidating the citizens as opposed to protecting them.
Mena, who was handcuffed and dragged claimed that the policemen appealed to her in respect to publishing a video recording of their experience.
The cops reportedly gave the pair a sum of N30,000 for treatment. Pulse reached out to Mena for comments who is yet to offer none at the time of this report.
We were however able to get confirmation of the incident from the Public Complaint Rapid Response Unit (PCRRU) of the Nigerian Police Force.
One of its representatives revealed that the police is aware of the alleged assault and have commenced an investigation into the matter.
“It is still under investigation,” the police spokesperson told Pulse in an interview.

A recent public outrage has trailed the acts of violence reportedly carried out by operatives of the Special Anti-Robbery Squad (SARS), who have allegedly robbed, abused and murdered some innocent Nigerians.
Their behaviour seems like an opposite of how the government want them to function and the citizens have grown impatient.
In the year 2017, the criticism of the police department grew very intense, inspiring a reaction from the Inspector General of Police Ibrahim Idris, who gave the go-ahead for a prompt punishment of SARS operatives who have acted against protocols.
ALSO READ: More tension in Ondo as SARS operative allegedly kills man 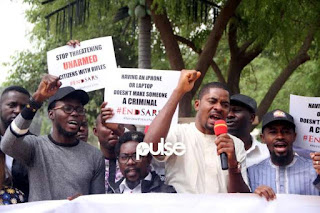 States such as the Federal Capital Territory (FCT), Lagos, Delta and Rivers saw a crowd of disgruntled people protest with placards expressing a disapproval concerning the continuance of the Special Anti-Robbery Squad which has failed to live up to the purpose of its creation.
A group of people comprising of mostly women are also asking that SARS remain in existence. On Twitter, the hashtag #SupportSARS preaches a reformed SARS as opposed to ending it.