Five Nigerians resident in Ghana have been reportedly killed in a reprisal attack after a Nigerian man killed a Ghanaian who attacked him.Five Nigerian who are resident in Ghana have been reportedly killed with scores injured after violence broke out following the murder of a citizen of that country by a Nigerian man during a fight.
According to reports, the incident which has been likened to a Xenophobic attack, happened over the weekend in Sowutoum, a suburban town near Omanjor in the Greater Accra Region, after the Nigerian, Thompson Peter, allegedly stabbing the Ghanaian man, Misbau Amadu, to death.
It was gathered that the 48-year-old Peter who has since been arrested, committed the act in self-defense after the Amadu had attacked him in his house after he had earlier reported him for stealing from him.
The murder reportedly led to attacks against Nigerians living in different parts of the country with the police unable to tame the angry citizens as they were chased away when they tried to restore order.
A Nigerian resident in that country, Ifeanyi Chukwuemeka, took to his Facebook page to narrate the incident, warning other Nigerians to be very careful and watchful.
ALSO READ: “ECOWAS War: Nigerian prostitute stabbed by Ghanaian counterpart for snatching customer”
This is how Chukwuemeka captured the incident:
“The victim was rushed to the Mary Lucy Hospital but was pronounced dead on arrival by the doctors.
Inspector Kwabena Danso, Deputy Accra Regional Police Public Relations Officer, said that a week ago, Thompson Peter lodged a complaint at the Sowutoum Police Station that Misbau Amadu had broken into his apartment and stolen some items.
After taking the statement of Thompson, the PRO said the police proceeded to the residence of Misbau Amadu with the intent of inviting him to the station to help investigate the claim but he was not available.
Thompson said at about 9:00 pm last Thursday, Misbau came to his (Thompson’s) house, armed with a knife to attack him for reporting the case to the police.
In the course of the fight, Thompson said he overpowered Misbau and stabbed him in self-defense. The matter is still under investigations.
The incident has led to many Nigerians being attacked. Please do be careful and watchful.”
ALSO READ: “Flop Of The Week: Nigerians at the receiving end over xenophobic attacks in SA” 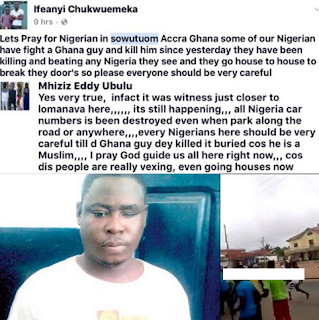 Another Nigerian resident in Ghana, Stephen Chase Ebuka, also took to his Facebook wall to confirm the attack on Nigerians, confirming that five Nigerians have so far been murdered in the reprisal attacks in the Santa-Maria area, a few kilometres away from Sowutom, further advising every Nigerian living in the area to stay indoors till things cool off.