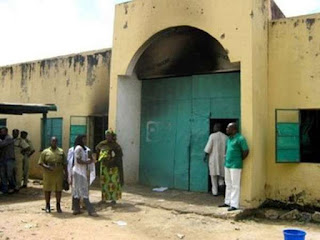 The Controller General of Nigeria Prisons Service (NPS) Mr Jaffaru Ahmed, has disclosed that 28 inmates of Ikot Ekpene Prisons who escaped during jailbreak on Dec. 27, 2017 were still at large.

Ahmed disclosed this to newsmen after an inspection of facilities in Ikot Ekpene Prisons on Friday.
The controller general, who described the facilities in Ikot Ekpene Prisons as well fortified, attributed the jailbreak to lapses on the part of prison staff.
“About 40 inmates found their way out of Ikot Ekpene Prisons in a broad daylight around 11.45 a.m.
“They took on the lapses that they saw, perhaps they have been planning it for a very long time and actualised it on December 27, 2017 when they saw the opportunity.
“The 28 that are at large are very hardened criminals; some of them are kidnappers awaiting trials, some are facing capital offences and therefore it is something to worry,” Ahmed said.
He lamented that those still at large supposed to be in custody to allow the other members of the society to live in peace.
He assured Akwa Ibom people and the entire nation that the fleeing inmates would soon be recaptured to face their trials.
He added that any staff found wanting would have to face the full wrath of the law.
The controller general debunked insinuations from some quarters that the jailbreak was due to infringement on the fundamental rights of the inmates.
He said, “These prisoners were not rioting because there was maladministration in the prison system, but they organised it in order to get freedom illegally. That is what actually happened.
“It was not that they were not being fed or given medical attention or not taken to court.
“Any insinuation anywhere, I state that investigation I have here before me, that there was nothing than they took lapses on the part of staff and organised to escape.”
Ahmed commended the Akwa Ibom Government for the support given to the Nigeria Prisons Service and appealed for more.
He thanked other sister security agencies for their cooperation and sought for more to enable the service to recaptured the fleeing inmates, to ensure peace and tranquillity in the state.