This was a great show. Davido had done it in a special way. 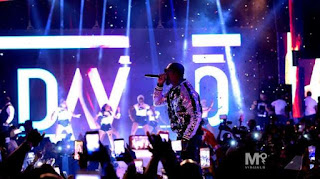 Davido has held the final leg of his ’30 Billion Concert’ in Lagos, Nigeria.

I didn’t see it coming. I didn’t go to Eko Hotel on this fine evening, hoping to be murdered.Davido killed me. In fact, he committed mass  murder by killing himself and everyone who showed up with a ticket to attend his headline concert, ’30 Billion Concert’.

Was it the good music? The great vibes, the excellence of reunions, or the promise pf a beef-free industry united by the higher power of the art, the music, the soulful essence of sound? How do we go forward into 2018 with negative thoughts about the music? Everyone was washed in the sweat of Davido, and we all came out clean, purged of anger, or speculations, of uncertainty, and anxiety.
Davido has done it for the first time, and he has done it at a level that no one has. 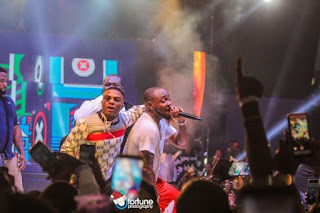 “All of Davido’s tickets are sold out, I cannot purchase any f0r myself and my sister,” my friend Seyi tells me. She had flown into Lagos from London, and one of the highlights of her stay in Nigeria was supposed to be attending Davido’s concert. All was ready. The transport was booked, the mind was prepared, the mood was ginjah, and the soul willing. But there was just one problem. Davido had sold out Eko Hotel, shutting it down in a way that no one has 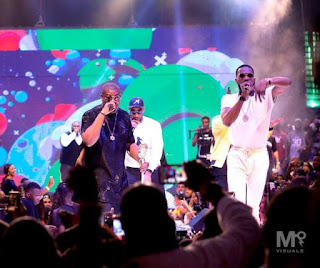 On social media, he bragged about it. Promotional tweets showed the error in delay, as every ticket category had been snapped up by eager fans who wanted to experience Davido’s art live.
Why was it such a heavy commodity? Why did the ticket grow wings and fly to the heaven of demand, where it was rushed and dispensed with lightning speed?
It’s because of Davido. The man and the name meant something this year. Davido dominated 2017 in a way like no other. Rebounding from a shaky 2016 where his incursion into the international scene had him firing blanks and walking to the brink of unhappiness. 2017 brought redemption and success in a way that he hasn’t experienced since 2014.What happened for him?
“30 Billion for the account oh…” that was the most important lyric ever penned and recorded in Nigeria’s music industry of 2017. It spoke a consumerist magic on the song ‘If’, penetrated the minds, heads and hearts of millions of aspirational Nigerian music consumers, and became the slang that defined David’s year.
Other records ‘Fall’, ‘Pere’, and new favourite ‘FIA’ can lay claims to brilliance, but they can’t hold a damn candle to the brilliance and dominance of ‘If’. It was a battle cry, a war chant, a victory lap, and the record to rule all records in 2017.
In 2017, Davido has held a US/Canada Tour, and an African tour tagged ’30 Billion Tour’, all of it derived from ‘If’. The final stop of that tour is in Lagos, the city that has started, embraced and powered his records to heights.
People were everywhere, begging for tickets. No one believed that the entire venue was sold out. Touts and middlemen, sensing an opportunity for cash to be made on the black market, began to seek opportunities to resell tickets. 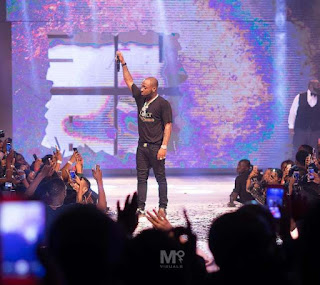 “Bros, that thing wey dey your hand, na big money oh,” a guy approached me, looking to close the deal. “I fit buy that ticket from you.”
I simply clutched my table ticket tighter and looked the other way. History was about to be made. Far be it from me that I missed out on such an epic night due to monetary greed.
Outside was a carnival. Soldiers and policemen patrolled between scores of people trying to get tickets, or get into the venue. The entrances were clogged, with no clear queue or anyone to manage the process. To access the venue, you had to push your way in, only the strong shall survive.
Well, I am strong. And I had my accesDavido took too long to get his act on the road. It felt like a talent hunt show were over 20 opening acts performed. While everyone waited and ground their teeth, waiting for the headline act, we had performances from Teni, Ellyman, Dapo Tuburna, Fefe, Prettyboi D-O, DNA Ryan, Attitude, Nonso Amadi, Sexy Steel, Wale Turner, Terry Apala, Iceberg Slim, TJan, Skuki, B-Red, Sina Rambo, Soldistar, Dice Ailes, Idowest, and more. It felt like forever.
His hosts Eniola Badmus and hypeman King Spesh did nothing to help either. The former clearly lacked the ranger and connectivity to ginger the crowd, while the latter had his lines all wrong. It was frustrating to watch and hear them do their thing onstage.
DJ Cuppy, put on a decent performance, while DJ Consequence took us to the heights of happiness and back.
And when it was time for Davido, King Spesh began to play Russian roulette with the fans.
“Are you ready for Davido?” he would ask the crowd. The tired people would muster up a valuable ‘Yes’. Only for them to be turned down.
“You guys aren’t ready for this, DJ E-Cool give them more music.”
The hurt. The frustration. The anger.
Finally, Davido hit the stage, with ‘Dami Duro’, and announced “Thank you guys for coming out. You are really going to have a great show tonight. I have so many surprises.”
And then he launched into ‘Gobe’ and ‘Ekuro’. When he performed ‘Back when’, he revealed it as his first ever recorded song in his career. It was also his debut single.
King Spesh would annoyingly later reveal that Davido’s a generous guy. Why? Because he tries to split his earnings between his ’50 friends’. I was mildly alarmed for the boy. But then, I remembered who his father was, and I lost my concern. Stupid me. OBO will be alright.Reminisce to perform ‘Daddy,’ he dedicated it to his Dad. He would later bring on his daughter Imade, to bask in adulation and shout-outs. 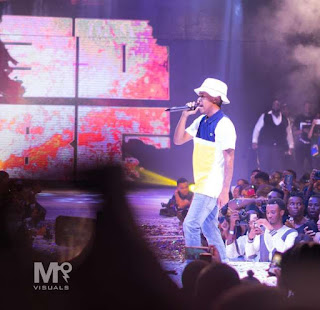 Daddy Davido was given a seat of honour. And when Davido returned with

Runtown would come out for ‘Gallardo’, but he had the chance to perform ‘For life’, before linking up with South African rapper, Nasty C for ‘Gallardo’. Davido joined him on ‘Coolest kid in Africa’.Niniola and Terry G moved quickly through their motions.
And then it was time for Wizkid. Davido hyped the crowd, asking “Do you want to see my new best friend?”
That best friend was Wizkid. Starboy hit the stage for a performance of ‘Manya’. The duo hugged, sang it out and Wizkid led the crowd in a chant. “Say OBO, say Starboy…make some noise for OBO”
Just then a fan ran onstage, to hug Wizkid and Davido, security detail tackled him before he could complete his life’s mission. Pour guy. Another fan, a chubby kid, bounced on stage and was allowed to share an intimate hug with OBO.
Humblesmith showed up for ‘Osinachi’, Falz delivered energy on ‘Bahd, baddo, baddest’, but Davido refused to supply his immortal line “Mr Dele na my boy, Dele na my boy.” He raised his hands in the air and said: “We don settle oh…” 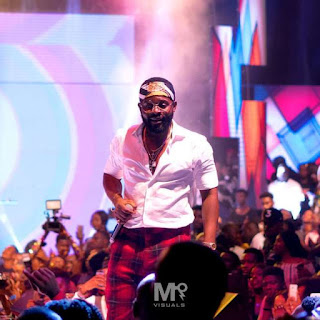 Elsewhere Olamide, Ice Prince, Lil Kesh, Patoranking and CDQ had their time in the sun. Brief, but valuable.
2face Idibia was next, and he cosigned Davido with some powerful declarations. “You see one thing with this motherfucker,” he said about Davido. OBO was the motherfucker, of course. “They have taken Nigeria music to the next level. Everybody wey dey talk another thing na beef. Davido, carry go.”
The biggest surprise of the night was the reunification of Mo’Hits for one more performance. Davido said he spent over two months pushing for it to happen, and it did. Led by Don Jazzy, the group comprising of D’banj, Wande Coal, D’Prince, Dr Sid and Kay Switch made a comeback. They performed some of their classic hits such as ‘Pere’, ‘Booty call’, ‘Give it to me’, ‘Pop something’ and ‘Suddenly’.It was beautiful seeing this reunion, and the reaction from the fans made the walls trembled. Nobody knew how to process it. We were in heaven, OBO’s place of enjoyment and good music.Ikechukwu joined in for ‘Whine am well’, and Wande Coal rounded off with ‘Iskaba’.
And finally it was time for the sprint to the finish line. And Davido handled it well with ‘Like dat’, ‘If’, ‘Fall’, and the burning favorite ‘FIA’. The best part was having everyone united and singing to each other with joy in their eyes: “Shukura kilokosi o, shuku shaker, Aya shoemaker…”
This was a great show. Davido had done it in a special way. And while the organisation, flow and attention to detail was nothing to be happy about, he gave us more Wizkid, and did the unthinkable – reunite Mohits. 30 Billion ruled 2017. What’s next in 2018?