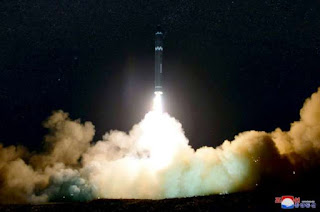 Tensions have escalated after the isolated but nuclear-armed regime staged a series of atomic andintercontinental ballistic missile (ICBM) tests, most recently on November 28. US President Donald Trump and North Korean leader Kim Jong-Un have also traded personal insults.
“Treasury is targeting leaders of North Korea’s ballistic missile programs, as part of our maximum pressure campaign to isolate the DPRK and achieve a fully denuclearized Korean Peninsula,” Treasury Secretary Steven Mnuchin said in a statement, referring to North Korea by the abbreviation of its formal name.
The two officials were listed last Friday in a new United Nations Security Council resolution sanctioning North Korea, it said.
“Kim Jong-Sik reportedly is a key figure in North Korea’s ballistic missile development, including efforts to switch from liquid to solid fuel, and Ri Pyong-Chol is reported to be a key official involved in North Korea’s intercontinental ballistic missile development,” the Treasury statement said.
Solid-fuel missiles can be fired on shorter notice, as they do not have to be filled with liquid fuel prior to launch.
“As a result of today’s actions, any property or interests in property of those designated by OFAC within US jurisdiction are blocked, and transactions by US persons involving the designated person are generally prohibited,” Treasury said, referring to its Office of Foreign Assets Control.
The sanctions announcement came as Russian Foreign Minister Sergei Lavrov and US Secretary of State Rex Tillerson held talks by phone in which they discussed North Korea’s nuclear program.

“The sides were united in the opinion that nuclear missile projects in North Korea violate the demands of the UN Security Council,” the Russian foreign ministry said after the call.
Lavrov “once again highlighted that it is unacceptable to exacerbate tensions around the Korean peninsula with Washington’s aggressive rhetoric toward Pyongyang and increasing military preparations in the region,” it said.
Trump habitually refers to Kim as “Little Rocket Man” and has threatened to utterly destroy his regime with “fire and fury.” North Korea has branded Trump a mentally disturbed “dotard.”
“It was underlined that it is necessary to move from the language of sanctions to the negotiating process as soon as possible,” the statement said, adding that it was Tillerson who initiated the call.
On Friday, the UN Security Council unanimously passed new, US-drafted sanctions that will restrict oil supplies vital for North Korea’s missile and nuclear programs.
The third raft of sanctions imposed on the North this year, sparked by last month’s ICBM test, also received the backing of China — the North’s sole major ally and economic lifeline.
The sanctions also order the repatriation of North Korean workers sent abroad to earn much-needed revenue for Kim’s regime.
North Korea slammed the fresh UN sanctions as an “act of war.”
“We fully reject the latest UN sanctions… as a violent breach of our republic’s sovereignty and an act of war that destroys the peace and stability of the Korean peninsula and a wider region,” Pyongyang’s foreign ministry said in a statement carried by the state-run KCNA news agency.
The latest launch of the Hwasong-15 ICBM, theoretically capable of hitting all major US cities, further heightened global alarm over the rapid advance in North Korea’s weapons technology, which has made significant progress since Kim took power in 2011.