Awuah-Darko and his university friends have ambitious plans for the sprawling Agbogbloshie dumping ground in Ghana’s capital, Accra. 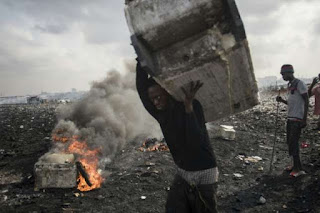 Joseph Awuah-Darko sits on a stool at one of the world’s largest electronic waste dumps, watching polystyrene and insulation cables burn on the blackened ground.

“It’s survival and dystopia,” says the 21-year-old British-born Ghanaian, surveying the stretch of wasteland around him as dense plumes of acrid smoke rise into the air.
Awuah-Darko and his university friends have ambitious plans for the sprawling Agbogbloshie dumping ground in Ghana’s capital, Accra.
In January this year, he co-founded the non-profit Agbogblo.Shine Initiative, which encourages people working at the dump to turn waste into high-end furniture.
The dump workers typically risk exposure to harmful fumes by burning obsolete and unwanted appliances such as mobile phones, computers, televisions and plastics that are brought to Ghana from around the world. 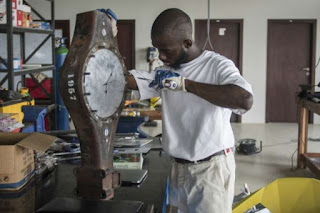 After burning, they salvage and resell copper and other metals from these leftovers of modern consumer culture.
The dump and scrapyard sit next to the heavily polluted Odaw River in the slum-like area, home to an estimated 40,000 people.
The United Nations has said that salvaging materials for recycling provides income for more than 64 million people in the developing world.
Ghana is said to have the largest informal recycling industry in Africa and imports some 40,000 tonnes of this e-waste annually.

‘We are suffering here’

When Awuah-Darko first saw the piles of circuit boards, wires and plastics at Agbogbloshie he decided he wanted to use his artistic talent as a force for change.
So he set up the Agbogblo.Shine project with Cynthia Muhonja, a fellow student from Ashesi University, about an hour’s drive from Accra. 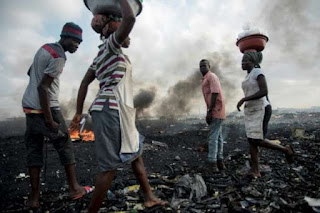 They repurpose the electronic scraps, “upcycling” them into furniture, and offer training for the young men who work at the dump to create the pieces.
The students straddle two worlds — a privileged life on the lush campus of a private university in a forested area, and the harsh reality of life for some of Ghana’s poorest people.
Mohamed Abdul Rahim, who is in charge of about 20 young men, has been working at Agbogbloshie since 2008.
The 25-year-old from the north of Ghana works 12-hour days, six days a week. On average the workers make only about 20 cedi each ($4.50, 3.75 euros) a day.
He knows the work is bad for his health but doesn’t see any other option. However he is optimistic that Awuah-Darko’s initiative will help. 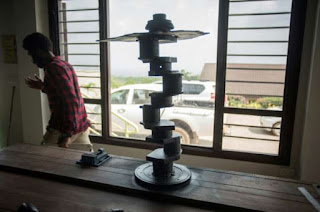 “We are suffering here because the heat is there, the smoke, too, it disturbs us. If we see good work we will go join it and leave this,” he says.
The toxic fumes hurt his lungs, while his hips and waist ache from carrying heavy objects to burn. The money he earns supports his mother, wife and three children.
The ground he works on is black, muddy and littered with plastic bags, cables, bottles and broken shoes alongside smashed television sets and computer monitors.
Workers use plastics and polystyrene as fuel to melt down components to extract the copper.

Awuah-Darko recognises that the people of Agbogbloshie “are basically in pursuit of what we all want, which is a better life”.
“Unfortunately, the side effects or the by-product of this is the detriment of their health,” he said. 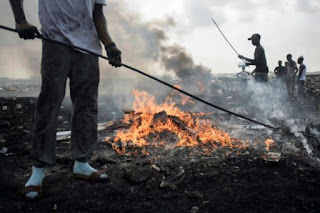 He hopes that his initiative will not only improve their lives but also the planet, as waste from the site is given another life.
Awuah-Darko’s first upcycled work is a grandfather clock, made from a galvanised car axle, aluminium and part of a discarded wall clock.
Two high-end hotels in Accra are currently vying to buy the unusual timepiece, he said, and with such interest he has plans to create more and expand operations.
Awuah-Darko sees a future where around 100 people from Agbogbloshie can leave their harmful work to build furniture.
He also wants to exhibit the creations at major galleries around the world and sell them at auction houses.
That would be a world away for someone like Mohammed Sofo, a thin 26-year-old with small tattoos on his face.
But Sofo wants to live in a world where he does not have to burn waste to survive.
“Some people think we are bad because they think we are mad persons,” he said.
“If we get money no one will look at us like that. Some day will come when no one will be working here.”