Former US President warns of social media dangers, in interview with Prince Harry

Despite admitting concern over the future of the US, Obama, who did not mention his successor Donald Trump by name… 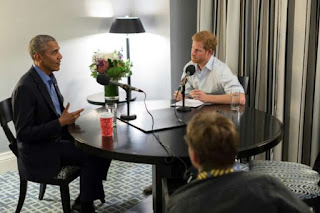 Former US President Barack Obama told Britain’s Prince Harry he was concerned social media was “corroding civil discourse”, in what he said was his first interview since leaving the White House, aired Wednesday.

“One of the dangers of the internet is that people can have entirely different realities,” he told the prince, who was guest editing BBC Radio 4’s Today programme.
“They can be cocooned in information that reinforces their current biases. Things aren’t as simple as they’ve been portrayed in whatever chat room you’ve been in,” he added.
“The question has to do with how do we harness this technology in a way that allows a multiplicity of voices, allows a diversity of views, but doesn’t lead to a Balkanisation of society and allows ways of finding common ground.”
The interview was recorded in Toronto, Canada, in September on the sidelines of the Invictus Games, the athletic tournament created by Harry for wounded former soldiers.
Despite admitting concern over the future of the US, Obama, who did not mention his successor Donald Trump by name, said he felt a sense of “serenity” on leaving the White House.
“There was a sense that we had run a good race,” he added.
On his new routine, Obama told the prince: “I wake up later, it’s wonderful to be able to control your day.”
The prince opened the discussion by saying: “This is the first interview you’ve said ‘yes’ to doing since you handed over the reins”, to which Obama replied: “that’s true”.
Harry is due to marry his US actress girlfriend Megan Markle on May 19 at St George’s Chapel in Windsor Castle near London.
According to British press reports, civil servants are concerned that a wedding invite from the couple to Obama could cause a further rift between Britain and Trump following a series of high-profile spats.