Nigeria flags menace of corruption, repatriation of illicit funds, others

The delegation was led by the Permanent Representative of Nigeria to the United Nations Office and other International Organisations in Geneva, Amb. Audu Kadiri. 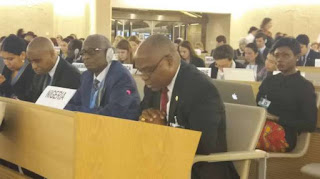 Nigeria has again appealed to the conscience of the global community to give attention to the menace of corruption, repatriation of illicit funds and the plight of migrant workers and refugees.

The Nigerian delegation at the UN Human Rights Council in Geneva, expressed concern on the adverse effect of corruption on the enjoyment of human rights and fundamental freedoms.
The delegation was led by the Permanent Representative of Nigeria to the United Nations Office and other International Organisations in Geneva, Amb. Audu Kadiri.
The News Agency of Nigeria (NAN) reports that Nigeria was recently re-elected into the Council for another two-year term.
Nigeria said it has called for the unconditional repatriation of illicit funds to countries of origin in its several interventions on human rights situations across the globe.
It stressed that repatriating illicit funds to countries of origin would immensely help the countries in achieving their development plans and reform processes.
The Nigerian delegation stated that such measures would create a more conducive atmosphere for the promotion and enjoyment of human rights and fundamental freedoms.
On the issue of migrant workers, Nigeria stressed the need for international cooperation in this regard.
It noted the alarming vulnerability of migrants’ children and women, and urged transit and destination countries to give priority to saving the lives of vulnerable migrants regardless of their nationalities and immigration status.
It further noted that migrant workers are important contributors to the socio-economic development of both countries of origin and destination.
Nigeria, therefore, encouraged states of origin, transit and destination to enhance cooperation among themselves in the best interest of the vulnerable migrants, particularly women and children.
During the general debate on the Oral Update, the High Commissioner for Human Rights briefed the session on the work of his office.
Nigeria emphasised the need for a global synergy as well as respect for the sovereign equality of nations and non-politicisation, in addressing human rights situations across the world.
It reaffirmed its commitment to the promotion and protection of human rights and fundamental freedoms.
Some of Nigeria’s interventions focused on the right to development and sustainable environmental management.
On the issue of sustainable environmental management, Nigeria noted the adverse effect of oil pollution in the oil producing Niger Delta region, which has affected the livelihood of the people of the region.
It, therefore, reaffirmed its commitment to the issue of sustainable environmental management.
Furthermore, on the subject of the right to development, Nigeria emphasised the importance of international cooperation and solidarity for the achievement of the 2030 Sustainable Development Agenda.
It underscored the interconnectivity between the right to development and the 2030 Agenda, and called for concerted effort by states for the realisation of the right to development.
The Nigerian delegation noted that the Human Rights Council had continued to be politicised, as virtually every human rights issue was given a political colouration.
In this regard, Nigeria stressed the importance of upholding the principle of respect and sovereign equality of States, which is the basis for international intercourse.
This, the delegation stressed, would immensely help in reducing suspicion and double standards, which have always trailed the work of the Human Rights Council.