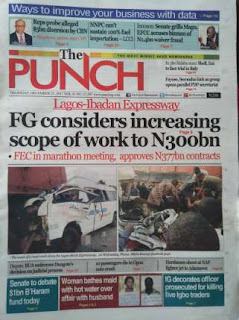 find out what is making headlines all over the country from the covers of The Guardian, Vanguard, The Punch, ThisDay and BusinessDay.

EFCC releases Innocent Chukwuma, Innoson MD
The Economic and Financial Crimes Commission has released the Managing Director, Innoson Groups/Motors Limited, Chief Innocent Chukwuma who was arrested yesterday.
Police to Senate: We need N1.13trn annually
THE Nigeria Police told the Senate that if it must perform effectively and efficiently, it would require  nothing less than N1.13trillion for its overhead cost annually, against N31.6billion earmarked for it in the 2017 budget.
Group moves to break PDP, sets up parallel secretariat
THE Peoples Democratic Party, PDP, was yesterday headed for a fresh crisis, following the emergence of a splinter group, christened “Concerned Candidates and Stakeholders of PDP, who disavowed the penultimate weekend’s national convention and the leadership that it produced.
__________________________________________________

IG decorates officer prosecuted for killing five Igbo traders
The Inspector-General of Police, Ibrahim Idris, on Wednesday, decorated Ibrahim Danjuma with his new rank of Commissioner of Police after he had been prosecuted and acquitted for the extrajudicial killing of five Abuja traders and a lady in 2005.
Fayose, Secondus kick as group opens parallel PDP secretariat
A group made up of about five men on Wednesday ‘opened’ a parallel secretariat for the main opposition party, the Peoples Democratic Party, in Abuja.
Lagos-Ibadan road: FG considers increasing scope of work to N300bn
Members of the Federal Executive Council, on Wednesday, embarked on a marathon meeting that saw them approving contracts totalling about N960bn.
__________________________________________________

PDP Dismisses Threat as Defeated Contestants Open Parallel Secretariat
Barely 48 hours after a chairmanship candidate in the recently concluded national convention of the Peoples Democratic Party (PDP), Prof. Taoheed Adedoja, sued the party, another aggrieved group has set up a parallel office in Abuja, promising to also constitute its own national executive by January.
NFIU to Get Independent Status Jan 1
As part of the requirements to avert the expulsion of Nigeria from the Egmont Group, the Nigerian Financial Intelligence Unit (NFIU) will from January 1, 2018, become a self-accounting institution, independent of the Economic and Financial Crimes Commission (EFCC).
Innoson Boss, Chukwuma, Rejects His Release by EFCC
More than 24 hours after the Economic and Financial Crimes Commission (EFCC) stormed the residence of the chief executive officer and founder of Innoson Vehicles Manufacturing (IVM) Group, Mr. Innocent Chukwuma, and arrested him over a commercial dispute between him and his bank – Guaranty Trust Bank Plc (GTBank) – the commission Wednesday released him on bail.
__________________________________________________

Reduced fleet spikes domestic airfares for Christmas
Domestic air fares are set to spike this Christmas as a result of a fall in the number of operational aircrafts in Nigerian airlines’ fleet.
China, Nigeria lead world Bitcoin transactions in 2017
China and Nigeria lead the world’s peer-to-peer (P2P) bitcoin transactions in the year 2017 outpacing major European countries, the United Kingdom and the United States of America, according to data from LocalBitcoins.com.
OPL 245: Italian court orders Shell, Eni to stand trial
An Italian judge yesterday ordered Royal Dutch Shell and Eni to stand trial over alleged corruption in Nigeria involving the award of OPL 245 seven years ago.