Alanamu said that NNPC resumed pumping of petroleum products, especially petrol, to the depot on Wednesday… 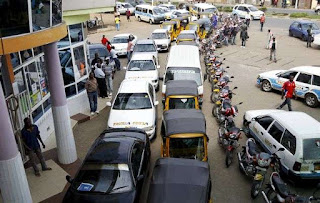 Alhaji Ayo Alanamu, the Chairman of Ejigbo Depot, made the commendation in an interview with the News Agency of Nigeria (NAN) in Lagos on Thursday.
Alanamu said that NNPC resumed pumping of petroleum products, especially petrol, to the depot on Wednesday to ease fuel scarcity in South-West.
According to him, loading of petrol by tankers started at the depot on Thursday.
“I strongly believe that before weekend, queues will vanish.
“Marketers within Lagos metropolis are being given priority attention while NNPC has increased loading capacity of trucks,’’ he said.
According to Alanamu, the aim of pumping petroleum products to the depot is to reduce the difficulty marketers go through while taking the products at the Apapa private depot.
“Now that pumping has resumed in Ejigbo Depot, the number of trucks waiting to take load in Apapa will reduce drastically; it will also reduce the chaotic traffic situation there,’’ he said.
A NAN correspondent, who visited the depot, reports that tankers were taking petroleum products out of the depot.
However, petrol scarcity within the Lagos metropolis remains the same as many filling stations are without the product.