The consultant will identify relevant stakeholders for the implementation of the government’s economic plan. 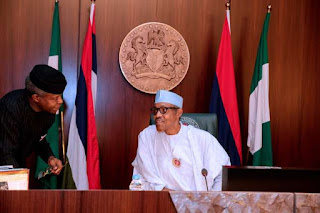 The Federal Government has approved the hiring of an expert consultant to conduct a study on the implementation of President Muhammadu Buhari’s Economic Recovery and Growth Plan (ERGP).

According to a report by The Punch, Minister of Budget and National Planning, Udo Udoma, disclosed that the decision was reached at the Federal Executive Council (FEC) meeting at the Presidential Villa on Wednesday, November 15, 2017.
At the meeting which was presided over by Vice President Yemi Osinbajo in President Buhari’s absence, Udoma told State House correspondents that the cost approved for the consultancy job is N458m.
He said the consultant would identify relevant stakeholders in both private and public sectors for the implementation of the ERGP, and that the study would be conducted on agriculture, transportation, power, gas and processing, among others.
More details to follow.