Council approves N16bn for augmentation of Galma Dam in Zaria

According to him, the purpose of the dam is to provide water to Zaria and seven other local government areas of the state. 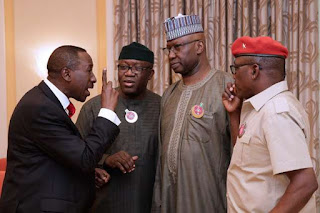 Briefing State House correspondents on the outcome of the meeting, the Minister of Water Resources, Alhaji Suleiman Adamu, said the phase 1 of the dam had been completed while the phase II involved irrigation and additional structures.
According to him, the purpose of the dam is to provide water to Zaria and seven other local government areas of the state.
“Council also approved the augmentation of phase II Galma Dam and irrigation project in Kaduna, Zaria.
“The purpose of the dam is to provide water Zaria and environs to the city of Zaria.
“The phase I dam has already been completed while phase II involves irrigation and some additional structures.
“So there was an augmentation to raise the cost of the project by N16.5 billion in favour of Gilmore Nig. Ltd,’’ he said.
Adamu revealed that the council also approved N5.6 billion to complete Adada dam Igbo-Atiti area in Enugu State, with the aim to provide water to the university town of Nsukka.
He said the project also involved the construction of water treatment plant and some kilo metres of pipeline as well as provision of water supply to some communities along the route.
“The Enugu State government is expected to take the conveyance system from where we stop from the water treatment plant into Nsukka town and provide the necessary distribution, storage and reservoirs.
“The project started in 2010. This project has been augmented and council approved that the project be completed now at N5.6 billion by the end of 2018.’’
The minister disclosed that the Council also approved the review of construction fee for Uguashi-Ukwu dam project in Delta.
He said: “The project is almost 100 per cent completed but because of the extension of time over the years, we have to ratify the need to pay consultants for staying on site to oversee that project. So council approved the sum of N133.6 million.’’
Also, the Minister of the Federal Capital Territory (FCT), Alhaji Muhammad Bello, said the council approved an augmentation of additional N3.8 billion for the completion of Inner Southern Expressway from the Outer Southern Expressway.
He said that already a portion of the road had been completed and opened to traffic for motorists from Keffi-Nyanya axis into the city-centre.
“Today, the council discussed two important projects of the FCT in line with the government’s agenda of trying to complete ongoing infrastructure projects that have the maximum beneficial impact on the territory.
One of them is contract upward review in respect of the inner southern expressway from the outer southern expressway.
“This is the road that is popularly known as Goodluck Jonathan Expressway that links traffic from the Keffi-Nyanya axis into the city.
“As you know, we opened a portion of that road sometime in July this year and you have seen the impact.
“So for that project to be truly completed, there is the need to complete some of the inter-changes as well as the extension roads that we have put in the project.
“Because of the changing in cost and so on, we have been able to get an augmentation of additional N3.8 billion on that particular project,’’ he said.
He said the council also approved the infrastructure development of WASA resettlement site, saying that 197 new roads would be constructed in the area covering 88.95 kilometres.
According to him, the resettlement site is meant to accommodate 13 indigenous communities as part of the master plan.