Fresh PDP members are jobless miscreants to be arrested – Governor

Fayose said the party would never go back to the era of Ali Modu Sheriff, former factional chairman of the PDP, who fuelled the crisis in the party. 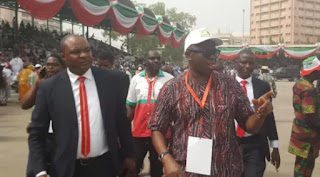 The governor of Ekiti state, Ayo Fayose, has described members of the splinter group of thePeoples Democratic Party (PDP), Fresh PDP, as miscreants who should be arrested and detained.

Reacting to the emerging group, Fayose said the party would never go back to the era of Ali Modu Sheriff, former factional chairman of the PDP, who fuelled the crisis in the party.
The chairman of PDP governors also said it was clear that the enemies of the PDP were at work.
“I appeal to Nigerians to ignore the “jobless miscreants”.“They are simply charlatans. I won’t be surprised and we are doing investigations to know those who are behind them.
“In a society like Nigeria, where we need a virile opposition, we need to continually put the government of the day on its toes for them to know that Nigeria is greater than all of us.
“Some miscreants would just make press statement and say they are splinter group or whatever they call themselves. In a proper democracy, they are supposed to have been arrested and detained for breaching the peace of the society as their action is unwarranted and uncalled for.
“But we are not going to celebrate such by making an issue out of it. Nigeria needs peace at all times. We are not going to go back to the days of Sheriff and co, by giving attention to those persons making noise all over the place. This party will remain focused and move on. 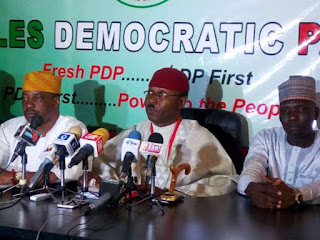 ALSO READ: PDP faction named Fresh PDP sets up Abuja secretariat
“I urge Nigerians to ignore them. When I saw them on the Internet, they were faceless people I cannot recognise so they remain a set of jobless miscreants.”

PDP reacts to emergence of faction

Earlier on Wednesday, December 20, 2017, a group led by Emmanuel Obi-Nwosu, opened its own national secretariat in the Asokoro area of Abuja.Obi-Nwosu, who contested the national youth leader position and lost, claimed that ‎the process of selecting the current national working committee (NWC) was concluded days before the convention.
According to Channels TV, some of the leaders of the faction are: Chief Olusola Akindele, Chief Godwin Duru, Franklyne Edede, Prince Obi Nwosu and Alhaji Hassan Adamu.Reacting to the recent development, the PDP, in a statement said it will not be distracted.
The spokesman of the PDP, Kola Ologbondinyan said “The PDP is completely unperturbed by the comical act of some individuals who make outlandish claims in the media regarding our party.
“The fact is that we are happy with the efforts of the Governor Seriake Dickson-led Reconciliation Committee as well as the responses from all the respectable and responsible leaders of our party in that regard.
“We will however not be responsible or respond to any person or groups of individuals who decide to allow themselves to be used by forces from another political party in a laughable and childish attempt to distract us. 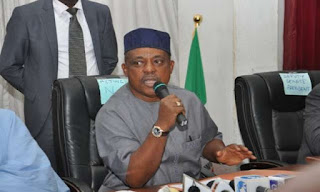 ALSO READ: How security men barred Olisa Metuh from PDP Convention
“The PDP under the Prince Uche Secondus-led national leadership will continue to focus on repositioning our great party to be the formidable opposition that will guarantee checks and balances in our polity and ultimately regain power in 2019.”
The Peoples Democratic Party (PDP), on Saturday, December 16, 2017, held its convention,where national leaders were elected.