Afrobeat summer party, ‘Cactus on the roof’ to hit Lagos this December 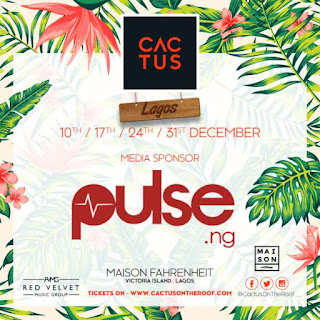 After a successful summer series and a tropical halloween zombie

apocalypse, organizers are set to up the ante in Lagos.The event will hold every Sunday this December at the avant-garde rooftop of Maison Fahrenheit hotel with Breath taking views of the Atlantic ocean setting the backdrop.

ALSO READ: DJ Cuppy DJ hints on the kind of man she plans on dating next

DJ Cuppy hosts ‘Cactus On The Roof’ in Lagos

https://youtu.be/0rrjxcYGay4London’s most talked about Afrobeats summer party, Cactus on the Roof hosted by DJ Cuppy is coming to Nigeria for the first time.

After a successful summer series and a tropical halloween zombie apocalypse, organizers are set to up the ante in Lagos with theatrical entertainment and over the top champagne indulgence – ‘Tis the season to be Jolly.
DJ Cuppy after an astonishing debut single with ‘Green light’ ft Tekno, takes centre stage with a host of celebrity DJ’s and friends. Guests will be thrilled with an eclectic mix of neo-afrobeats in signature Cuppy style, funky house, hip-hop, house and the very latest & chart topping Afrobeats.
Date: Every Sunday in December, 2017
Venue: Avant-garde rooftop, Maison Fahrenheit hotel.
Tickets are available at https://www.nairabox.com and https://www.fatsoma.com/cactusontherooflagos