The issue was brought to the floor of the House by Honourable Abubakar Danburam-Nuhu, who raised a motion accusing the Law School of infringing on Amasa’s fundamental rights. 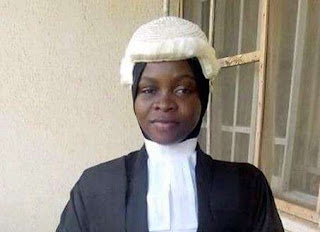 The House of Representatives has decided to investigate why Firdaus Amasa was not allowed to take part in the Nigerian Law School’s call to bar ceremony.

Amasa was reportedly barred from the ceremony for wearing an Hijab (an apparel worn by Muslim women as a symbol of modesty and privacy).
According to Premium Times, the House directed its Committees on Justice and Judiciary to look into the matter.
NAIJ also reports that the issue was brought to the floor of the House by Honourable Abubakar Danburam-Nuhu, who raised a motion accusing the Law School of infringing on Amasa’s fundamental rights.

Reports say the Sultan of Sokoto, Mohammad Sa’ad Abubakar recently condemned the Nigerian Law School’s decision to stop Firdaus Amasa from being called to the bar.
The Sultan also added that the constitution is clear and that no Nigerian can be discriminated against and denied their right.
ALSO READ: Muslim lawyer should be praised for exercising her religious rights

Meanwhile, the lady in the eye of the storm, Firdaus Amasa, has vowed to continue her demand for Muslim ladies to be allowed to wear their hijab during their call to bar ceremony.
Amasa also said that she wants to change the narrative by giving her Muslim sisters the right to express their constitutional rights as enshrined in the constitution.
Various Muslim bodies have also showed solidarity for the lady’s action.