Nicholas made the call during a familiarisation visit to military units  in Maiduguri  on Wednesday. 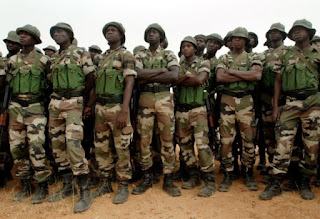 The Theater Commander, Operation Lafiya Dole,  Maj.-Gen. Rogers Nicholas, has called on people in the North-East to support the military in the counter-insurgency campaign in the country.

Nicholas made the call during a familiarisation visit to military units  in Maiduguri  on Wednesday.
He said that the call was imperative to enable the military to win the war against Boko Haram insurgents and enhance restoration of peace in the region.
“It is high time for people in the communities support the military by providing useful information on suspicious persons in their respective communities.
“We need the support of everyone in the society to successfully complete the campaign. Security is a collective responsibility; we must strive to stop the killings.
“Even the Boko Haram insurgents, I call on them to renounce their heinous activities, surrender and embrace peace,’’he said.
The theatre commander disclosed that the military authorities had adopted effective strategies to end insurgency and facilitate restoration of peace in the war-ravaged region.
He added that effective modalities had been put in place to improve personnel welfare, motivate and boost troops’ morale.
While commending the troops for their gallantry, the commander urged them to be disciplined and dedicated to the fight against insurgency, noting that: “Boko Haram insurgency will be over soon”.
The News Agency of Nigeria (NAN) reports that Nicholas assumed duty on Monday following his appointment as the new Theatre Commander, Operation Lafiya Dole.
He was accompanied by Maj.-Gen. Ibrahim Yusuf, the General Officer Commanding, 7 Division, and other top military officers during the familiarisation tour of military formations in Maiduguri.
Some of the areas visited include: the 7 Division Army Headquarters, Joint Intelligence Detention Centre (JIDC), Army Medical Services and Hospital and Artillery workshops.