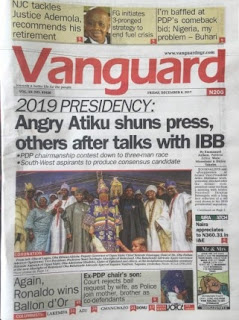 IBB, Jonathan wade into South West PDP discord
Ahead of tomorrow’s national convention of the Peoples Democratic Party (PDP), two former Heads of State General Ibrahim Babangida and President Goodluck Jonathan, have begun prevailing on the leadership to concede the position of national chairman to the South-West, based on the political grouping’s Port Harcourt agreement and zoning principle.
Government issues conflicting reasons for fuel shortage
Nigerians wishing a quick end to the scarcity of fuel across the country may have more days to wait going by the explanation offered by Minister of State for Petroleum, Ibe Kachikwu.
NJC recommends compulsory retirement of justices Ademola, Tokode
The National Judicial Council (NJC) under the Chairmanship of the Chief Justice of Nigeria (CJN), Walter Onnoghen, has recommended compulsory retirement of Justice Adeniyi Ademola and Justice O. O. Tokode, both of the Federal High Court, for misconduct.
__________________________________________________

Buhari: My Kano Visit, Reception is a Clear Message to the Opposition
In a clear pointer to his popularity in the most populous state in Northern Nigeria and with an eye on contesting the 2019 presidential election, President Muhammadu Buhari yesterday in Kano disclosed that the overwhelming reception accorded him by the people of the state was a clear message to the opposition in the country.
Kachikwu Rolls Out Emergency Plan to End Petrol Scarcity
Following the directive by the Federal Executive Council (FEC) to the Minister of State for Petroleum Resources, Dr. Ibe Kachikwu, to end the fuel shortages by the weekend, the minister yesterday rolled out short-term measures, which he said would end the fuel scarcity.
NJC Rejects Justice Ademola’s Resignation, Retires Him, Another Judge Compulsorily
The National Judicial Council (NJC) has rejected the resignation letter of Justice Adeniyi Ademola of the Federal High Court, Abuja, and instead recommended him to President Muhammadu Buhari for compulsory retirement for alleged misconduct.