On the Ardo-Kola State Constituency bye election, Umar said the Commission’s headquarters would soon announce the date for the election. 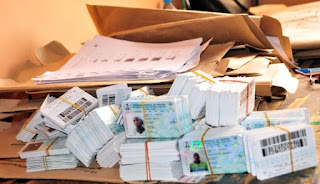 The Independent National Electoral Commission (INEC) in Taraba on Wednesday said 49,000 Permanent Voter Cards (PVCs) have not been claimed by their owners.

The Administrative Secretary of the Commission, Alhaji Muhammed Umar, disclosed this at a stakeholders meeting in Jalingo.
According to him, over 26,000 of the PVCs have not been collected by their owners in Jalingo town alone.
He advised the affected persons to visit their respective Council Areas’ secretariats and claim their PVCs.
On the Ardo-Kola State Constituency bye election, Umar said the Commission’s headquarters would soon announce the date for the election.
Umar said the proposed Feb. 10, 2018 would be subject to the approval of INEC headquarters.
The stakeholders had earlier in the meeting agreed on Feb. 10, 2018 as date for the bye election.
The State PDP Chairman, Mr Victor Bala, had appealed to the commission to reschedule the election from mid Jan. to Feb. 10, 2018 as his party was pre occupied with preparations for its national convention.
Mr Augustine Kunnini, the State’s All Progressives Congress (APC) Treasurer, agreed with Bala’s position, saying that the date would give the parties ample time to prepare for the election.
The Speaker, Taraba House of Assembly, Mr Abel Diah, had on Nov. 20, declared vacant the seat occupied by late Abdulmalik Dame, the former member representing Ardo-Kola in the assembly.

Dame died on Oct. 26 in Yola after a brief illness