Atiku made the appeal during his first appearance at the PDP’s National Secretariat, Abuja, with a crowd of supporters. 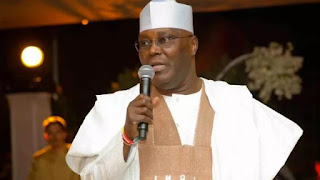 Former Vice President Atiku Abubakar on Tuesday urged all leaders who had left the Peoples Democratic Party (PDP) to return to make the party stronger.

Abubakar made the appeal during his first appearance at the party’s National Secretariat, Abuja, with a crowd of supporters, three days after declaring his return to the party.
Abubakar, who arrived at the secretariat at about noon, went to the office of the party’s National Caretaker Committee Chairman, Sen. Ahmed Makarfi, before he was received at the National Executive Committee (NEC) hall.
He addressed party leaders and members and restated that he had returned “home” like the PDP, and that no government had done 50 per cent of what PDP achieved in government.
“Let me pay tribute to past leadership of this great party; wherever they may be and to call on them to please return home as I have done.
“It is only by their returning home that we will build a stronger, more united party that can again return to government and continue to deliver the dividends of democracy,” he said
The former vice president disclosed that his return was to help continue with the reform and re-branding of the party which the national caretaker committee had started.
“We should remember that those of us, who founded this party, founded it on the principles of democracy, good governance, unity of this country and prosperity of its people.
“Over the years, like any or every human organisation, it has faced its challenges but I want to pay tribute to those who have stayed steadfast through thick and thin to see us through to this point.
“Now that we have learnt our lessons, I hope that we will be guided by the lessons we have learnt.
“And, that is to make sure that we build an all-inclusive party, where every part of this country will have a sense of belonging and sense of participation.
“To achieve all these, there must be sacrifices, understanding and compromises in the process, and that is what I speak to members to imbibe.”
He said that one thing he would never compromise was the internal democracy process in a political party.
Welcoming Abubakar back to the PDP, Makarfi said he had returned in good time, adding that PDP would continue to consult with him.
He urged him to continue to contribute in reinventing and remodeling of the party so that it could reclaim Aso Rock in 2019.
“We are not just targeting Aso Rock, we are targeting the federal legislature, the states, both executive and legislature. We are targeting the local governments.
“We want to sweep elections all across the party. As a united party we have the capacity and we have the ability to do so.”
Makarfi added that the return of Abubakar had “opened the flood gates and we expect many more high profile returnees and new entrants into the PDP.
“So, PDP must be prepared for this, and be ready to reconcile and reiterate in such a way and manner that everybody will be treated and given a level-playing field to purse his or her personal aspiration.
“That is what PDP must stand for if it has to survive.”