The president told a crowd of supporters in Kano that he could win another election with their help. 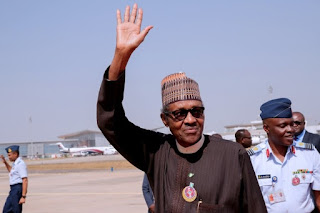 President Muhammadu Buhari has revealed his confidence of winning another election while speaking to a crowd of supporters in Kano State on Wednesday, December 6, 2017.

The president made the comment while he was visiting the Emir of Kano, Muhammadu Sanusi II, at his palace as part of his 2-day visit to the state.
While addressing the crowd, the president noted that the reception fills him with the confidence that he could win another election.
“I am overwhelmed by the sea of people I see, and by what I see today, if elections are contested I will no doubt win it,” he said.
The president had earlier been received at the Mallam Aminu Kano International Airport by the Emir, Kano’s Governor Umar Ganduje, and other traditional rulers and politicians.