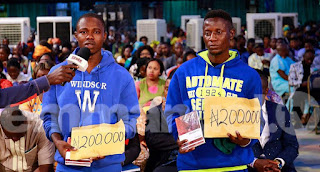 A deported Nigerian victim of the ongoing slave trade in Libya, Victory Imasuen narrated his ordeal in Prophet T.B Joshua’s church on Sunday.

The young barber, an indigene of Edo State, said that his father died when he was just 11 and that he struggled to sponsor himself through school along with his five siblings.
Recounting how he became a victim of slave trade, Imasuen said, “When I was cutting the hair of one of my customer’s, he advised me to go to Europe where he promised I could earn a lot of money. I asked the man how much it would cost me. He said N350,000 but I said I only had N140,000 with me.”
According to him, the man promised to assist him, without knowing he was about to sell himself into slavery.
He explained that travelling by road through Niger was a terrible one, recounting how a vehicle in his convoy killed 30 people instantly in a fatal accident in the Sahara Desert.
“Upon arriving in Libya, the driver said he had not been paid his money and we were sold into the slave trade in Sabha. Ten other Nigerians were sold and then we were locked up in one small room. More than 200 slaves were kept inside the cell.
“They started beating me to call my mother to send money. That was when my mother learned I was not in Nigeria – because I did not tell her before I left,” he narrated.