Worker dies in herdsmens attack while on routine exercise duties
Community leaders, others die in Adamawa attack by suspected herdsmen
In the ongoing attack on communities  in Adamawa state, several individuals have been reported to have died. 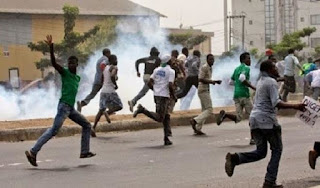 Though not yet confirmed, the heads of the village Dong, Dabang Kayako and that of Lawaru, Ferdinand Boro, have been murdered in the attack said to be allegedly launched by herdsmen, Daily Sun reports.

The attack was said to have begun this morning, leaving the communiies in a state of commotion.
Meanwhile, a staff of the Savannah Sugar company, identified as Jamila Godfrey, has also been killed, another staff of the company revealed to Daily Sun.
Godfrey was said to be on a routine exercise, when he was shot by suspected herdsmen and died on the spot.
The attack by suspected herdsmen is still heated in the two communities in Adamawa State.
The Police is yet to confirm the incident and the number of lives lost in the gruesome attack.