A recent rally had sent the commodity to two-year highs, fuelled by hopes producers will extend output cuts well into 2018. 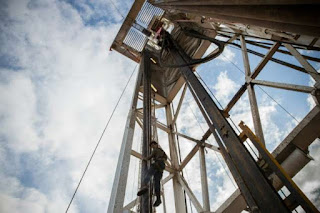 Oil prices tumbled more than one percent on Wednesday in ASia, extending the previous day’s sharp falls after the International Energy Agency warned of weakening demand.

A recent rally had sent the commodity to two-year highs, fuelled by hopes producers will extend output cuts well into 2018 as well as escalating tensions between crude giants Saudi Arabia and Iran.
But the Paris-based IAE said in a monthly report that it had revised down its forecasts for this year and next, adding that markets are expected to be oversupplied in the current quarter and going into 2018.
The announcement sent US benchmark West Texas Intermediate (WTI) diving 1.9 percent Tuesday while Brent shed 1.5 percent.
And those losses continued in Asia. WTI was down 58 cents at $55.12 and Brent lost 73 cents to $61.48.
Analysts have warned of a correction, saying the commodity was overbought and markets well supplied.
“The long-awaited short-term correction in oil prices finally occurred overnight,” said OANDA senior market analyst Jeffrey Halley.
“Given the bullish run and extended long positioning across commodities in general in recent times, it was only going to (take) one straw to break the camel’s back and see a mass rush for the fire exits.”
He added that soft economic data from China and a report of surging stockpiles by industry body the American Petroleum Institute also hurt sentiment.
Sukrit Vijayakar of Trifecta Consultants said too much risk had been put on the Saudi-Iran tensions and the market was rife with speculation.
“This situation can create what is known as ‘liquidation risk’ i.e. you may not be able to exit your position smoothly,” he told AFP.