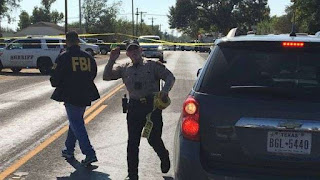 A fresh report of shooting in a First Baptist Church in Sutherland Springs in Wilson County, Texas has claimed lives of at least 27 people.

According to a report by BBC, a gunman opened fire at a church during Sunday services killing several worshippers.
The shooting and number of casualties were confirmed by Police official Albert Gamez Jr to CBS News.
It was also reported that the gunman was killed in the aftermath after opening fire on members of the church attending service at around 11:30 local time (17:30 GMT).
“The details are kind of sketchy but what I know right now, what they’re telling me, like 27 deceased and over 20, 25 injured,” Mr Gamez Jr said.
“They’re talking about the shooter is dead also,” he added.
Locals put the number of the church attendees at about 50 while claiming that children were among the murdered persons.
A Sherriff’s Office deputy from Guadalupe County confirmed that the gunman died after a brief car chase.
However, it was not disclosed if he was killed by police or killed himself, the spokesman said.
Carrie Matula, told NBC News: “We heard semi-automatic gunfire… we’re only about 50 yards away from this church.”
“This is a very small community, so everyone was very curious as to what was going on.”