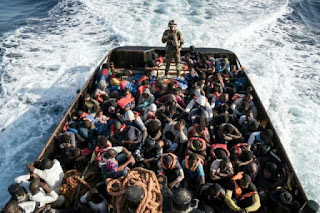 Most of the dead victims are teenagers aged 14 to 18

26 Nigerian girls and women have reportedly been sexually abused and murdered while trying to cross the Mediterranean to Europe.

According to a report by the BBC, most of the dead victims are teenagers aged 14 to 18 with 23 of the victims having been traveling with 64 other people.
Italian prosecutors are investigating the deaths after their bodies were recovered at sea with five migrants being questioned in the southern port of Salerno.
Spanish warship, Cantabria, docked at the port while carrying 375 migrants and the dead women kept in a refrigerated section of the warship.