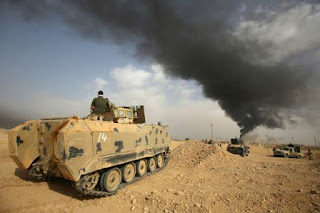 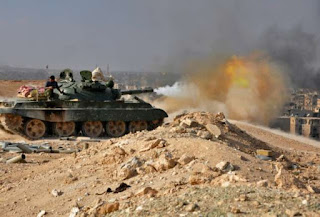 The jihadist group that once laid claim to a self-styled “caliphate” spanning swathes of Syria and Iraq has seen its proto-state crumble in recent months under the pressure of multiple offensives.
In October, it lost its one-time de facto Syrian capital Raqa after an assault of more than four months waged by the US-backed Syrian Democratic Forces, a Kurdish-Arab alliance.
On Friday, Syrian state media announced that the army, backed by Russian firepower, had recaptured all of Deir Ezzor city, in the oil-rich east of the country.
“The army announces full control of Deir Ezzor city,” state television said in a breaking news alert, citing sources on the ground. 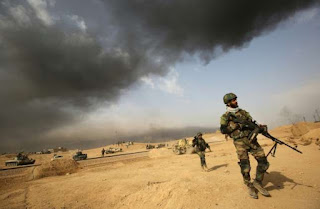 State television said engineering units from the army were combing captured neighbourhoods to clear mines and other explosives.
Syrian forces entered Deir Ezzor city in September, breaking an IS siege of nearly three years on government-held parts of the provincial capital.
The battle has been ferocious, with heavy Russian air strikes and Syrian artillery fire leaving much of the city in ruins.
A reporter contributing to AFP inside the city on Thursday saw entire floors of buildings that had crashed onto those beneath, while on others, facades were completely blown away to reveal empty, destroyed interiors.
Trenches dug by IS fighters were still visible, as were army minesweepers working to locate and defuse explosives laid by the jihadists. 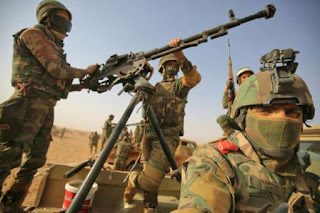 Iraqi forces enter Al-Qaim
Before Syria’s war began in March 2011 with anti-government protests, around 300,000 people lived in the city, provincial capital of Deir Ezzor province along Syria’s eastern border with Iraq.
But in 2014, IS jihadists seized the city and much of the surrounding province, including vital oil and gas fields that once served as a key source of revenue for the extremists.
IS has now been driven from most of its strongholds in Deir Ezzor, but it still controls over 35 percent of the province, much of it empty desert.
Its last major position is the town of Albu Kamal, though it also holds a string of smaller towns and villages and at least one oil field, according to the Syrian Observatory for Human Rights monitor.
IS, which at its peak controlled territory roughly the size of Britain, has suffered a string of losses in recent months in both Syria and Iraq. 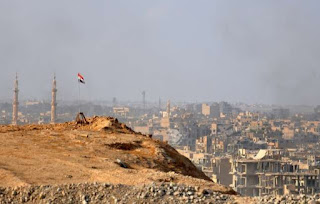 On October 17, it lost the city of Raqa to the US-backed SDF, a highly symbolic blow that illustrated how its “caliphate” has disintegrated.
In Deir Ezzor province, it is under attack by both regime and SDF forces, while across the border in Iraq it now retains a foothold in just a single town, Al-Qaim, after losing its stronghold of Mosul in July and the town of Hawija in October.
But Iraqi forces entered Al-Qaim on Friday, military commanders said, unleashing a barrage of artillery fire along with Iraqi and US-led coalition airstrikes.
Troops from the army and the elite Counter Terrorism Service “have started the assault on the centre of Al-Qaim,” Staff Major General Noman Abed al-Zobai, the commander of the 7th Division, told AFP from the scene.
Shortly afterwards, another officer said on condition of anonymity that the town’s Gaza district had fallen from jihadist hands.
The paramilitary Hashed al-Shaabi (Popular Mobilisation) force said in a statement that jihadists had set fire to civilian houses in the southwestern neighbourhood to make it harder to see them from the air.
Government forces launched the operation last week to seize Al-Qaim and its surroundings, a barren pocket of desert along the Euphrates river near the Syrian border.
The US-led coalition has said around 1,500 IS fighters are left in the area, which it expects to be the scene of the “last big fight” against the group in Iraq.
burs-sah/jmm/par