Evans filed an application seeking to be released on bail and for his case to be given an accelerated hearing. 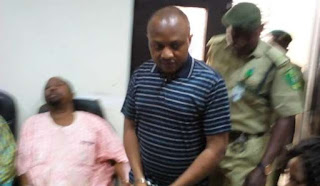 During the resumption of his kidnapping trial on Friday, November 3, 2017, Evans filed an application seeking to be released on bail and for his case to be given an accelerated hearing by the court.
The lead prosecution counsel, Ms. Titilayo Shitta-Bay, described the bail application, seeking accelerated hearing filed alongside an application seeking to quash the charges as an attempt to frustrate the trial and asked the judge to dismiss it.
During the last court hearing on October 19, Evans changed his initial plea of ‘guilty’ to ‘not guilty’ to the two-count charges of conspiracy and kidnapping.
The suspect had initially entered a ‘guilty’ plea to the charges after he was arraigned, alongside five other accomplices, before the court on Wednesday, August 30.
The suspect is being tried alongside five accomplices: Uche Amadi, Ogechi Izechuwku, Okechukwu Nwachukwu, Chilaka Ifeanyi and Victor Chukwumonso.
The defendants are accused of capturing, detaining and collecting a ransom of £223,000 on Mr. Duru Donatius between Feb. 14 and April 12, 2017.
Evans is also facing separate charges that include conspiracy, kidnap and murder before the Igbosere division of the Lagos High Court and will plead to the charges before Justice Oluwatoyin Taiwo on November 10.
The charges relate to the alleged kidnap and murder of Sylvanius Ahanonu Hafiia, and the conspiracy and attempted kidnap of the chairman of The Young Shall Grow Motors, Vincent Obianodo.