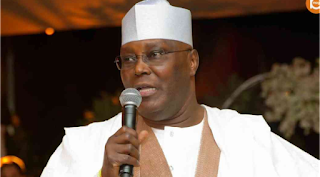 The former Vice President said he hasn’t declared to run for president.

Former Vice President Atiku Abubakar has dismissed a video where he appeared to declare his intention to run for president in the 2019 general elections as false.
In the video that showed up on social media on Thursday, November 2, 2017, the former vice president to former President Olusegun Obasanjo said he was ready to serve as a “true democrat, a believer in the rule of law and a fighter for justice and equity.”
Early on Friday, November 3, Atiku responded to the video on his Twitter account (@atiku) denying any knowledge of the it and calling it fake news.
He tweeted, “This Fake News is breaking across so many media channels, I’m wondering who sent it to them.”
The former Vice President has long been expected to declare his intention to run for president in 2019 despite being in the same party as incumbent President Muhammadu Buhari.